Do you know what is the best FTP for Mac or for Windows? Or simply, what does the term FTP mean? And why is it needed? Definitely, it's not necessary to explain these things for IT specialists. However, besides them, there are a lot of ordinary users, whom this abbreviation can simply frighten. So what is the main information about FTP Mac users should be aware of and what is the best FTP client? In case if you opened the new tab with the search for “FTP for Mac” or “best FTP” as well as “What is FTP?”, please, close it and read this article further.

There are various protocols for transferring data over the Internet and other networks. Every time you type the address of the site in the address bar of the browser, "http: //" is automatically added at the beginning. This is how the HTTP protocol (HyperText Transfer Protocol) is marked. This protocol is used to transfer to the user HTML-pages and related elements such as graphics, flash movies, scripts, etc. from the server. Besides that, it often transfers files that the user downloads to their computer.

However, the article is not about HTTP, but about another protocol. As you can see from the header, it is called FTP. This abbreviation stands for File Transfer Protocol. There is quite a logical question: if we have just said that while using HTTP, a user can download a file from the server to the computer, why do they need another protocol for transferring files?

The fact is that HTTP was originally intended only for transferring of hypertext to the user whereas while using FTP Mac users as well as Windows and Linux users are allowed to transfer files in both directions. In other words, FTP protocol supports the data transfer between the two servers, and also gives the users the ability to work with files located on the server, almost exactly as with those that are on their own computers.

However, if you want to fully use all the features of the FTP protocol when working with it, then you should look in the direction of specialized programs called FTP clients. There are a lot of FTP software Mac, Windows, Linux, etc solutions. But which of this great variety of FTP clients is worth your attention most of all? Well, we decided not to stop our choice on one FTP app for Mac, but have gathered the list of 6 most powerful apps.

The fist on our list is the app presented by Eltima Software and is called CloudMounter. It can be proudly called as one of the best FTP clients for Mac, as the app allows you to work with your online data the way as if it was located on your computer and has a flawless integration into Finder. The app is implemented in a rather minimalistic manner and can be a cup of tea for a savvy user as well as for a beginner. Besides working with FTP, FTPS and SFTP as well as with WebDAV connections CloudMounter offers you to mount the most popular cloud storages as local drives to your Mac, namely: Microsoft OneDrive, Google Drive, Amazon S3, Dropbox, BackBlaze B2, Box, and OpenStack. With CloudMounter you can seamlessly create, view, edit delete, as well as upload files to and download files from remote servers and cloud storages with just a couple of clicks. In addition, the app allows you to encrypt all your data no matter the chosen cloud or server.

Next on our list is one more solution presented by Eltima Software, namely Commander One. Despite being an excellent file manager, the app can also be your top choice of FTP program for Mac. Like the above mentioned CloudMounter, Commander One also supports connections to most popular cloud storages like Amazon S3, Dropbox, Google Drive, Microsoft OneDrive but, as you see, the list is a bit smaller. Nevertheless, it should be mentioned that all the login credentials for the connections are securely kept in Mac OS Keychain. The app allows you to effortlessly deal with the files and folders stored on your remote servers and cloud storages without copying the data to the computer. In addition, the app has a dual panel interface, that dramatically increases the work with the files, as you no longer need to open, close and jump from one tab to another. Besides all the information above, Commander One has a set of other rather useful features for the flawless work with the data. 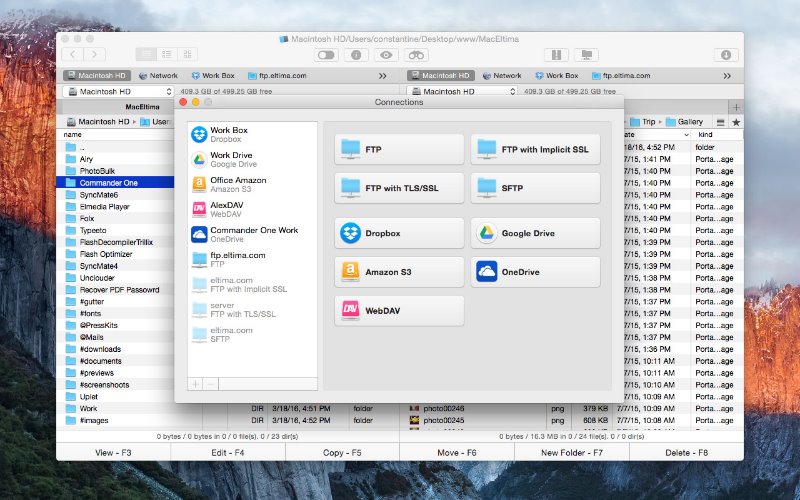 Another best FTP client for Mac on our list is Transmit. The app is also implemented in dual - pane format. On the left are files on your computer, on the right the files stored on the server. The app comes with a rather powerful set of features like folder syncing, backups, comparing files, deleting, uploading, downloading files, pre-viewing, remote editing of files etc. The app perfectly integrates into the native Mac environment. All this makes Transmit rather easy to learn. Besides that, the app allows you to add shortcuts to Finder as favorites in order to quickly access the necessary connections. Transmit supports SSH, SFTP, FTP, FTPs connections as well as 11 cloud storages among which you can find such cloud solutions as Backblaze B2, Box, Google Drive, DreamObjects, Dropbox, Microsoft Azure, and Rackspace Cloud Files, etc. the most string thing of this app is that it allows you to transfer files at an extremely fast speed. 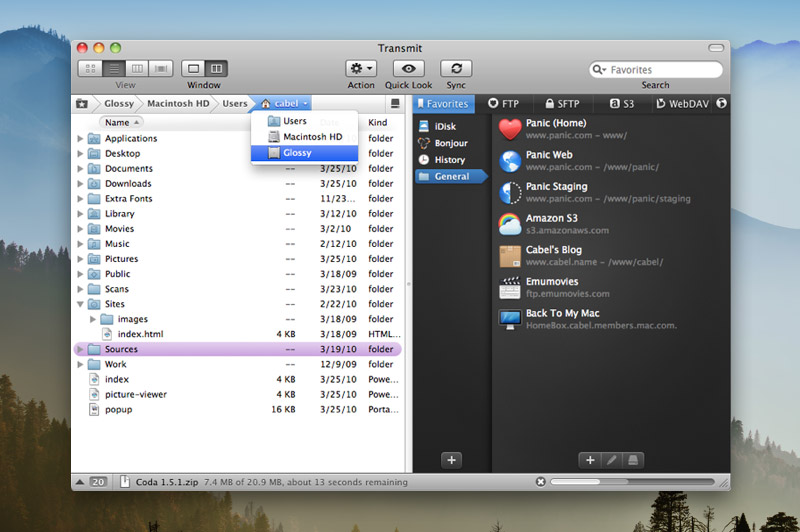 Next place goes to ForkLift. Rather convenient app with the possibility of setting the dark mode that can win hearts of many users. This user-friendly file manager perfectly works with remote servers through FTP, SFTP, WebDAV connections as well as with the list of commonly used cloud storages like Google Drive, Backblaze B2, Rackspace CloudFiles, Amazon S3. You can easily transfer the data between the connected servers by using such a familiar drag and drop feature. If you are looking for a full control from a keyboard, them Forklift can be your best Mac FTP client. 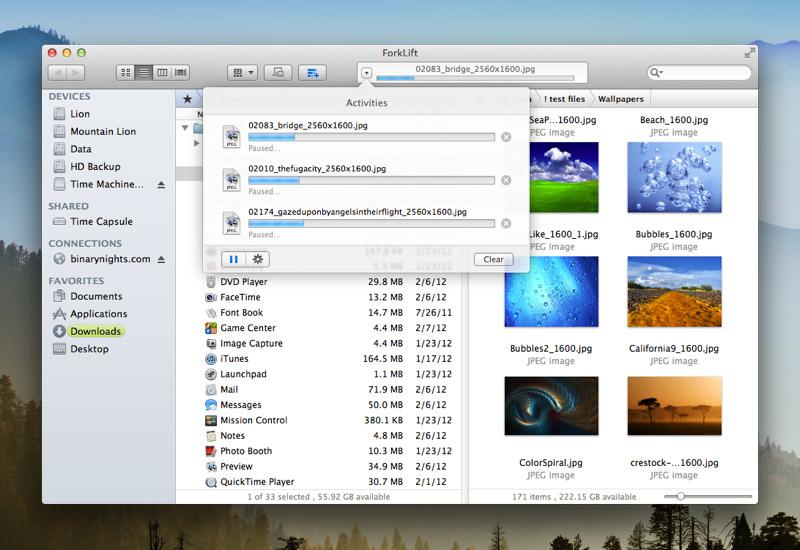 FileZilla is our next choice of best FTP client for Mac. While working with FileZilla you are able to view the whole file structure of the website/server you are working with. Having the built-in Site Manager the app makes it possible to save the login credentials as well as different connection settings in order to have a faster access to the servers. It worth mention, that the app can also present the status, commands, and responses from the chosen server in a text form. The app offers all the basic and advanced features the user would want to have from the FTP client. 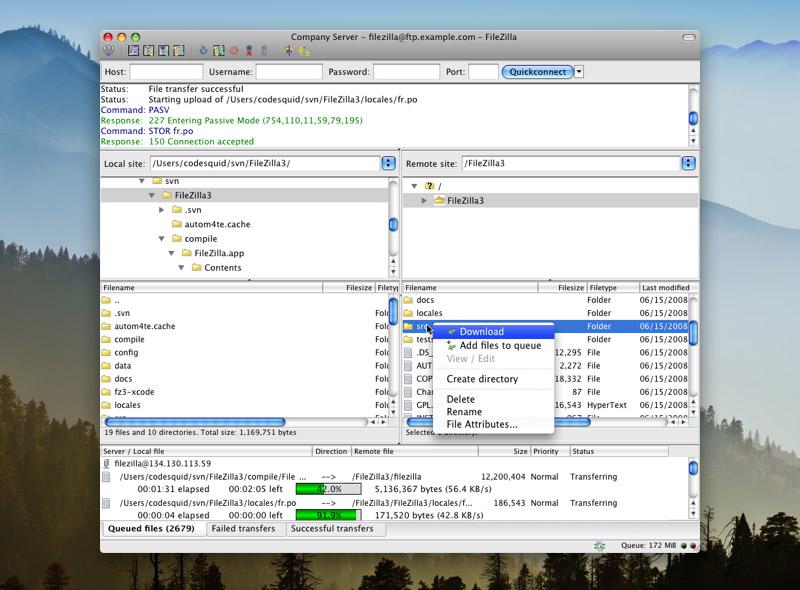 Cyberduck is the next rather popular FTP for Mac client. Like the mentioned above apps, Cyberduck can also boast about a bunch of interesting and useful features. With the help of this app, you can seamlessly save the desired FTP configurations as defaults in order to reconnect to the servers with just a couple of clicks. Store your login information in a Keychain and work with your files and folders directly from Finder. What else can one ask for? Rather straightforward and powerful, the app can work not only with the remote servers but also with cloud storages. 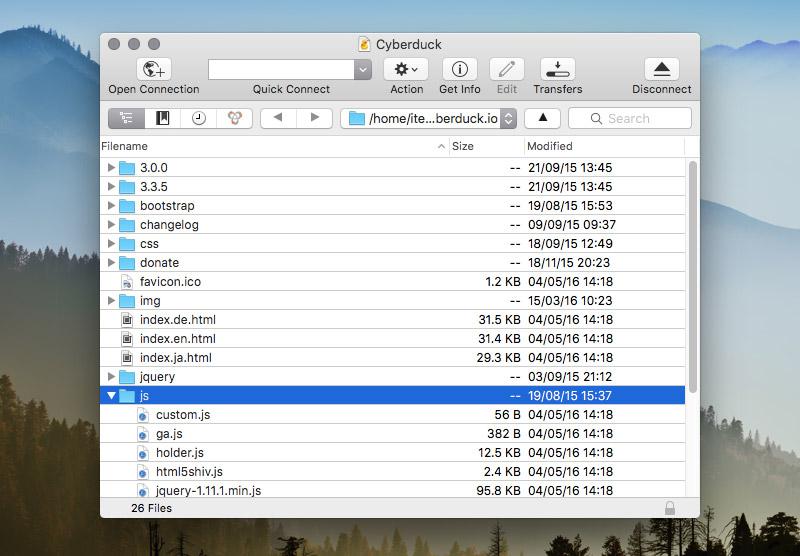 That’s it. Choose the most suitable FTP software Mac solution for you and enjoy the flawless work.