Understanding of SFTP and SFTP client

What is SFTP? How to use SFTP? Many users of a personal computer are unaware that there are many protocols that ensure their safe browsing on the Internet and only advanced of them know what ports and certificates are and how to use them effectively. Below in this article, we will throw light on such things as SFTP client, SFTP server and what are the benefits of using SFTP protocol.

What is SFTP? Learn what the abbreviation SFTP stands for

SFTP or SSH File Transfer Protocol is a network protocol that provides functions of file transfer and file management in any reliable data stream. It is usually used with the SSH-2 protocol, namely TCP port 22 to provide secure file transfers, but at the same time is also intended for use with other protocols. The abbreviation SFTP is often mistakenly used to indicate some type of secure FTP, by which people most often refer to FTPS. Another or similar mistake is that some people consider SFTP protocol to be something like FTP over SSL. In fact, SFTP is not FTP over SSL and not FTP over SSH (however, the latest is technically possible, but still very rare). SFTP (SSH FTP) is an application-level file transfer protocol that runs on top of a secure channel. In addition, it should not be confused with Simple File Transfer Protocol, which has the same abbreviation. 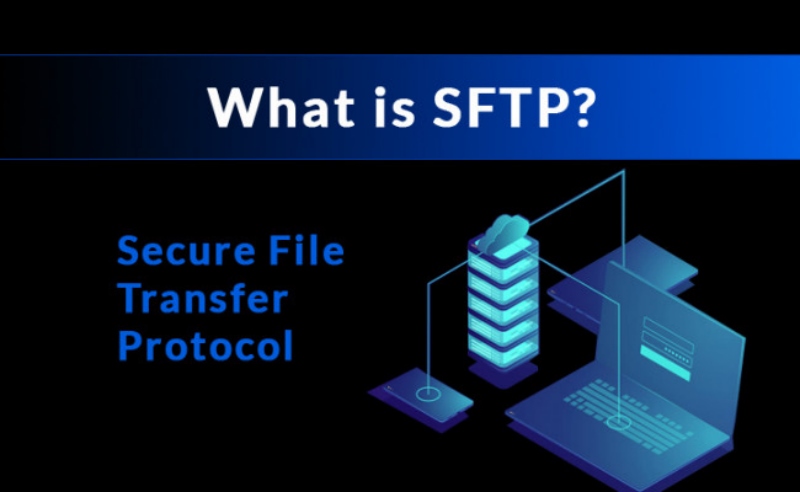 SFTP vs FTP, FTPS, and SCP. What is the difference

The main thing that distinguishes it from the standard FTP and FTPS is that SFTP encryption. In other words, SFTP encrypts absolutely all SFTP commands, usernames, passwords, and other confidential information. Since this is a completely different configuration, FTP or FTPS clients cannot connect to the SFTP server. If to compare SFTP to other protocols namely, Secure Copy Protocol or SCP, the situation is the following. SFTP is more “fluid” as a protocol and more platform-independent.

SFTP is an interactive protocol or file transfer program that performs all operations through an encrypted SSH transport. It uses several functions, such as compression or open key authentication, to connect and enter a specific host and enters interactive command mode. SFTP protocol can refer to either the simple file transfer protocol or the SSH file transfer protocol. The latter is intended for use with SSH for secure file transfers. SFTP has a different and wide range of operations available for remote files. Some of its more prominent features include resuming interrupted transfers, directory listings, and remote file deletion. As a result, SFTP is available on various platforms. In most cases, SFTP Mac owners use because it is based on security features and has the ability to combine SSH connections.

As it is already known, SFTP uses SSH by default to authenticate and establish a secure connection. That is why you can use SSH authentication methods. Despite passwords are set by default and easy to use, it is highly recommended that you create SSH keys and pass the open key to any system that you need to access to. This variant is much safer and is timesaving as well.

Few words about SFTP server and its peculiarities

To use SFTP, you will need both SFTP client program and Server / Daemon software. Server software is either already installed for you on a web server (in this case, if you are connected to a web hosting provider to upload files to your website) or a corporate server on which files will be uploaded/downloaded.

To set up the SFTP server correctly, you will need to connect to the web server via the Internet with the “Correct SFTP port” setting (usually it is port 22), redirected to the server from your firewall and the SFTP / Daemon installation service and installed on the system. After installing the SFTP server software, an SSH host key is created, then you can create and assign permissions/passwords for users and groups to allow access to the system.

SFTP servers/daemons can be installed on either Windows Systems, Unix / Linux Systems, Mac OSX, and other devices that support SFTP services. 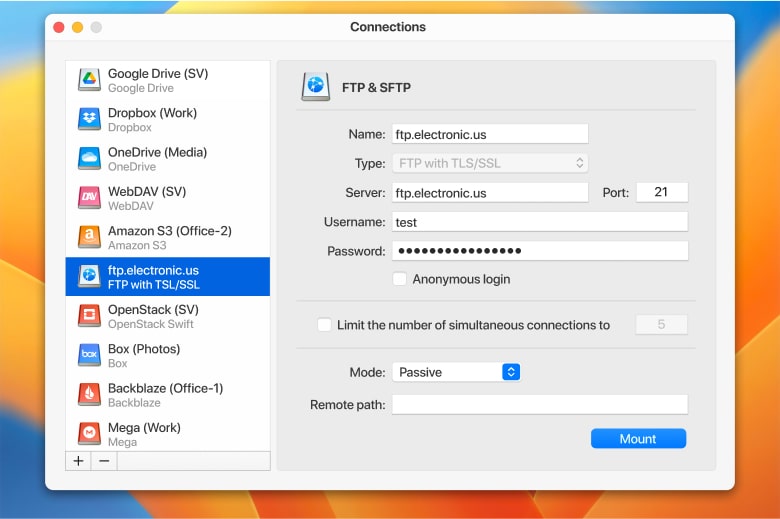 SFTP client is a program, either a command line or a graphical interface that gives you the ability to connect to an SFTP server and is integrated into it. The client software allows you to connect, authenticate and transfer files through a secure and encrypted connection to the server, through port 22 or any port that you specify. There are a lot of SFTP client Mac solutions on the market and to find the only one is not an easy thing.

CloudMounter is not only a great SFTP client for Mac but also a connection manager that makes it possible to work comfortably with various cloud services and remote servers. It acts as a bridge between the Mac and remote repositories, integrating online resources directly into the Finder. Just with a couple of clicks you can connect multiple accounts for one cloud, and with the same simplicity disconnect them. You can copy files there, download, create new ones and delete old ones as if it were just a folder on your computer. In addition to supporting a large number of Internet services, CloudMounter is also a safe SFTP software as all the information is protected with AES 256. Check it out to benefit from its full list of features.